Ota Art vol. 2 “100 years since the birth of Shokansai Iizuka – From painting to bamboo crafts” 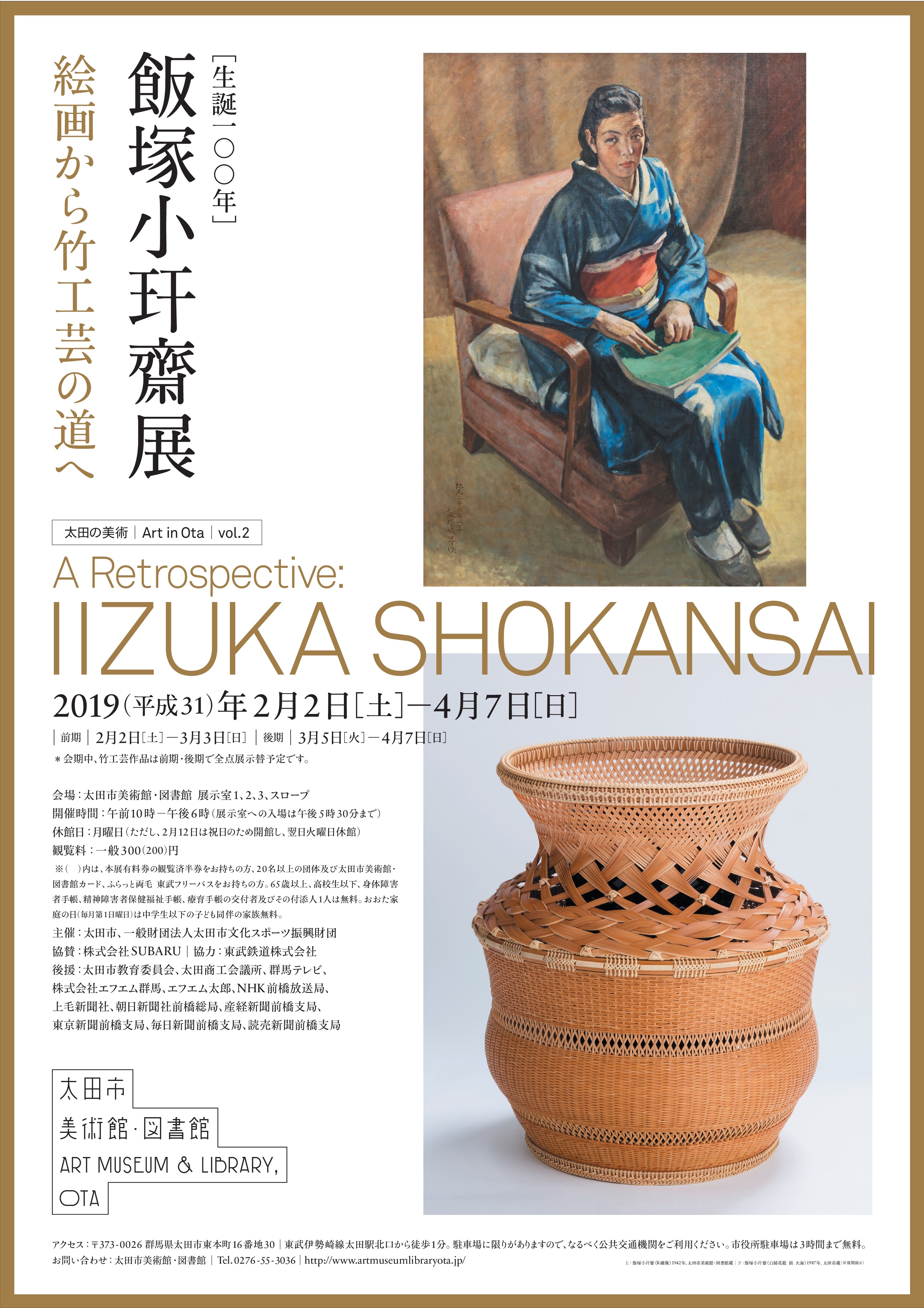 “I think that bamboo is the most beautiful in its natural state”- Shokansai Iizuka (1919-2004 / real name: Shigetoshi) is a bamboo craftsman who respected the raw material and aimed to express the unique beauty of bamboo. In 1982, he was recognized as a holder of Important Intangible Cultural Property “Bamboo crafts” (living national treasure). His refined works are based on the philosophy of “Utilitarian beauty”. Attracted by the rich natural environment of Mt. Kanayama covered in Japanese red pine, he moved to Ota City, Gunma Prefecture, in 1981 from Tokyo, and spent the rest of his life here working in his workshop. He developed the techniques learned from his father Rokansai by adding a modern sensibility, thus building the foundation of today’s bamboo crafts, and creating elegant and sophisticated works.
It is little known that Shokansai wanted, in fact, to be a painter when he was young. Born as the second son of the Iizuka’s, traditional bamboo craftsmen from generation to generation, he had known bamboo from an early age but entered the Tokyo School of Fine Arts Oil Painting Department (today’s Tokyo University of the Arts) to become a painter and studied under Takeji Fujishima. However, his elder brother Mikio, who had trained in the bamboo crafts with his father so he could continue the family business, passed away in 1943. After being demobilized, Shokansai gave up his dream of being a painter and entered the bamboo craft world under Rokansai’s guidance. His early works as a bamboo craftsman exhibited at The Japan Fine Arts Exhibition used bamboo as a material but also incorporated concrete and abstract expressions clearly influenced by his formation as a painter. However, working the bamboo day in and day out led him to create a different type of works, that did not require having an eye for painting. He began to pursue the “utilitarian beauty ” that is unique to bamboo objects originally meant to be used for daily activities.
This exhibition commemorates the 100th anniversary of Shokansai Iizuka birth. It features sketches from his junior high school days that already identify him as a prodigy, his graduation project from Tokyo School of Fine Arts, and bamboo artworks that illustrate evidence of painting expressions. Finally, the exhibition offers a glimpse of “utilitarian beauty” through a collection of about 30 bamboo works and documents. This is the story of Shokansai Iizuka, an artist who at first moved against his will from painting to bamboo craftworks, faced this new challenge and material, and continued to question the meaning of craft and beauty.

1. From the student days to the 1970s (Exhibition Room 1)
A display of Shokansai’s works from when he was striving to become a painter, from junior high school works to sketches and oil paintings done at Tokyo Art School, together with works by Takeji Fujishima, his tutor. Also displayed are works and documents created after the war when he was exploring pictorial expression and through to the period when he shifted to a focus on the material (1950s-1970s).
Major works on display: Sketches from his student days, Shokansai Iizuka’s graduation project (Miss K, 1942), bamboo craftworks from the 1950s to the 1970s, and paintings by Takeji Fujishima

2. Special Exhibition: Sakutaro Hagiwara “Bamboo” (Slope)
The poem “Bamboo” (Barking at the Moon, 1917) by Sakutaro Hagiwara (1886-1942), a poet from Gunma known as the father of modern Japanese poetry, is displayed on the wall of the Slope and visible from outside the building. It is our interpretation of the beauty of bamboo that became Shokansai Iizuka’s lifelong pursuit, from a different perspective than that of bamboo crafts.
Works displayed: Sakutaro Hagiwara, “Bamboo”