The Creative People of Ota

A platform of intellect and sensibilities to bring creativity to the city.

The Art Museum & Library is one aspect of Ota’s platform of intellect and sensibilities to bring creativity to the city.In modern times, Ota developed as a city of industry, and the knowledge and wisdom of  its citizens has been fostered through their roles in manufacturing. This knowledge remains today as the source of the town’s vitality.
In the midst of its energy, however, Ota faces many typical urban problems, including the decay of the traditional city center and an aging population. For Ota to remain a people-oriented and environmentally friendly city with people’s smiles, the participation and cooperation of each citizen is more important than ever.
With all of this in mind, the Art Museum & Library, Ota aims to be a hub for the craftsmanship-inspired creativity of the people of Ota, a focal point for redevelopment.
The Art Museum & Library will provide access to both art and books—works of art created with unconventional concepts that stir human emotion, and books to open the door to knowledge as a source of creative concepts. Our aim is to create a place for the creativity of the people of Ota to flourish, a place to develop projects to breathe life into the center of the town and city as a whole.
Art Museum & Library, Ota will cultivate “Creative People of Ota,” the future of our city.

（2）Objectives of Museum and Library Business

Collecting and studying the creative DNA of Ota

The museum and library will collect art and crafts originating in Ota, as well as historical documents about the area and its industry and promote studies on them as a way to uncover the original sources of creativity the city is known for.

Contact with the world’s most advanced sensibilities and creativity

We will provide opportunities for people to be exposed to the expressions and knowledge appreciated as the world’s most advanced, and assist Ota citizens in their creative endeavors. . We also aim to stimulate intellect and sensibilities by promoting both the art museum and library business.

Cultivating human resources and projects for the next generation

With the art museum and library as the hub, we plan to cultivate the creativity of children, our future city leaders. Citizens will proactively participate in business planning and administration, so both the municipality and the people of Ota take responsibility for its facilities.

There was a compelling reason why this Art Museum & Library was planned for the North Exit of Ota Station. Ota is a big city with a population of over 200,000. Ota Station is in the center of the city, and the number of incoming and outgoing passengers exceeds 10,000 each day. But in actuality, the area around the station is very quiet because most people get around in cars and go shopping in suburban shopping malls nowadays. This means there are fewer pedestrians to keep the city alive and bustling, and accordingly the attractive streetscape in front of the station is vanishing.
The museum and library buildings were planned under the concept that they would work as the motivators for attracting people to the station area to revive the flow of pedestrians, and, to eventually make the streets there attractive and enjoyable. In line with that concept, we set the basic concept for the buildings. 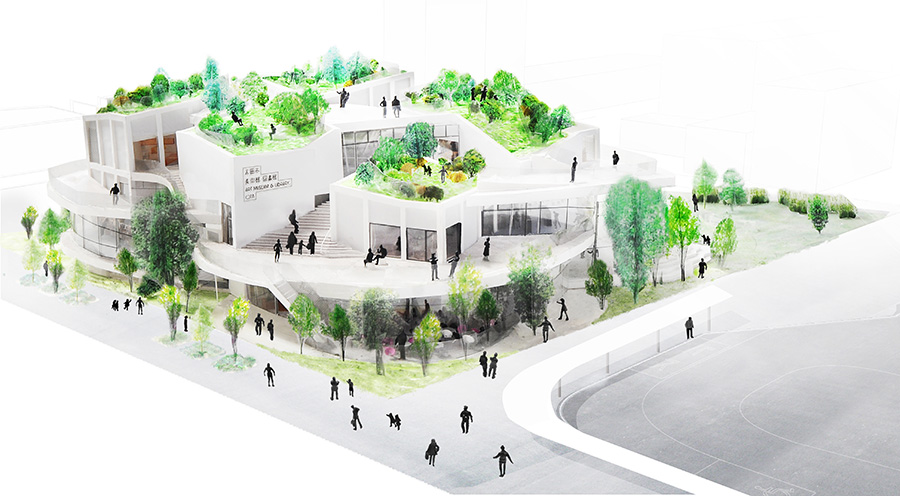 Architecture without constraints of in and out or front and back

The structure consists of five box-shaped ferroconcrete buildings, each of which is scaled to the other buildings, and a series of steel-structured slopes embraces them. An abundance of soil will be put on the top of each building to grow green plants. In this way, a hill-like landscape will be created with the mixture of architecture and greenery, as well as the combination of art and nature. It will evoke the landscape of hills scattered through Ota city, such as Kanayama or Tenjin-yama and its ancient tomb. 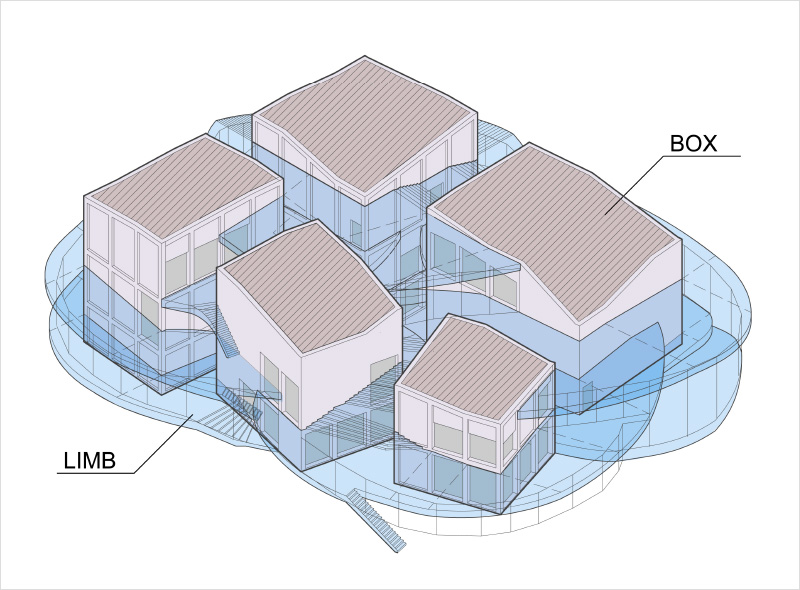 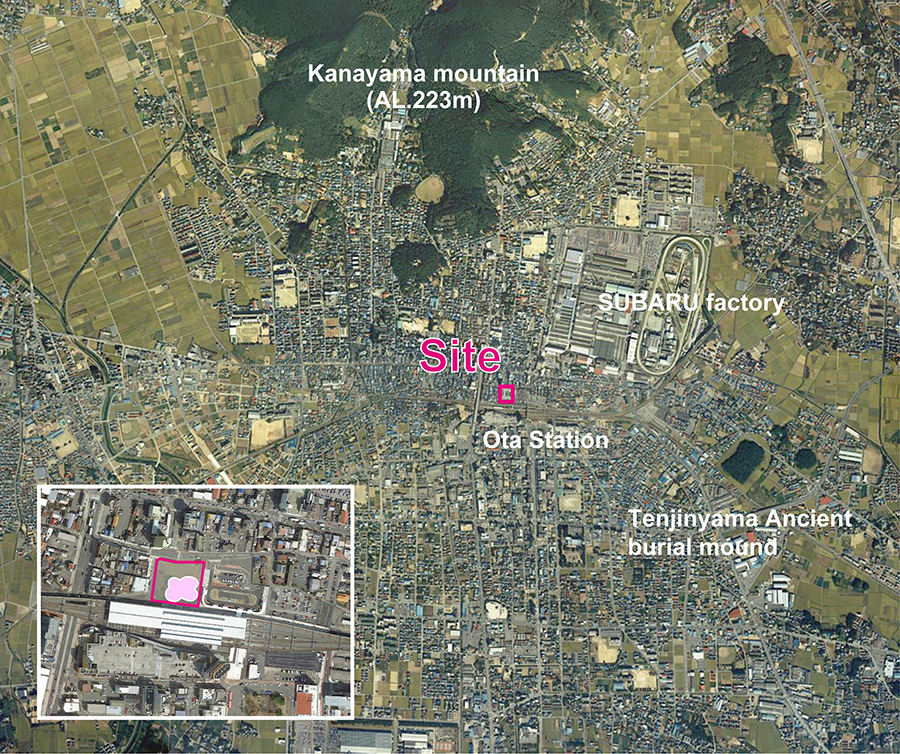 This structure has three entrances: east, south and west. People can enter from any direction and pass freely through. Each building is three-stories, but as all the floors are connected with gentle slopes, visitors can reach the next floor as naturally as if they were walking in town. Each spot is connected to the town. People from the town visit, pass through and return to the town again. These buildings are like the “knots” of the streets. 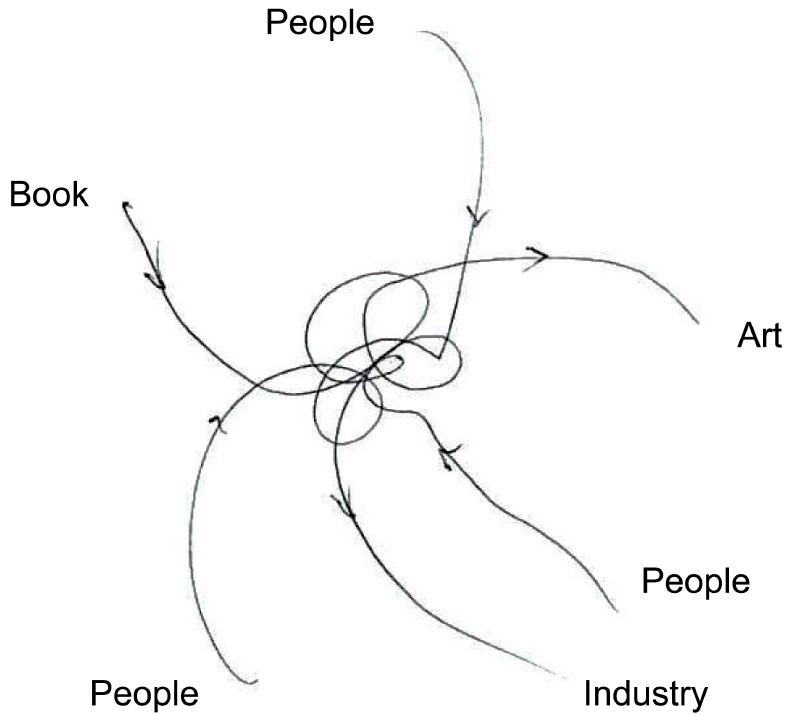 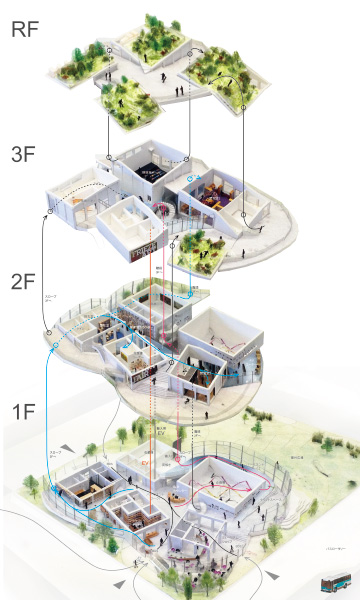 There are some “boxes,” each of which has a unique attractiveness. For example, an art gallery, café, place for reading newspapers and magazines, library for children, quiet study room, etc. Visitors can find a cozy space of their own to pass the time. Walking through the individual boxes is a joyful experience, like walking through town. Strolling around, one can encounter an interesting book, amazing art, new information on Ota, and many friends. The interior is designed to ensure a wide field of vision, so that people can glimpse places that they will want to visit. For example, you can see the workshop in the art museum from the library, bookshelves in the library from the café, and the energy of people passing through the slopes in the library from the station. Putting aside the conventional fixed concept of “museum” and “library,” an area with liberty and vitality is born. It makes you feel as if you were in town.

View of the open terrace from Ota Station 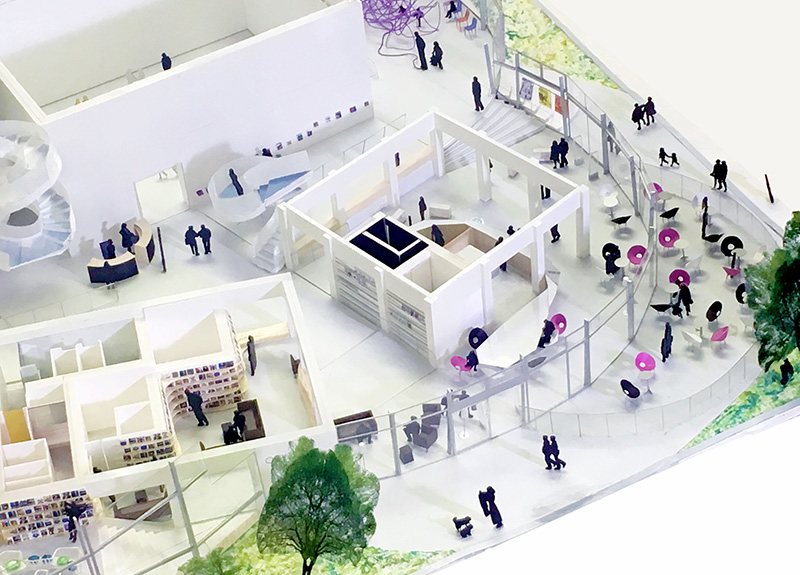 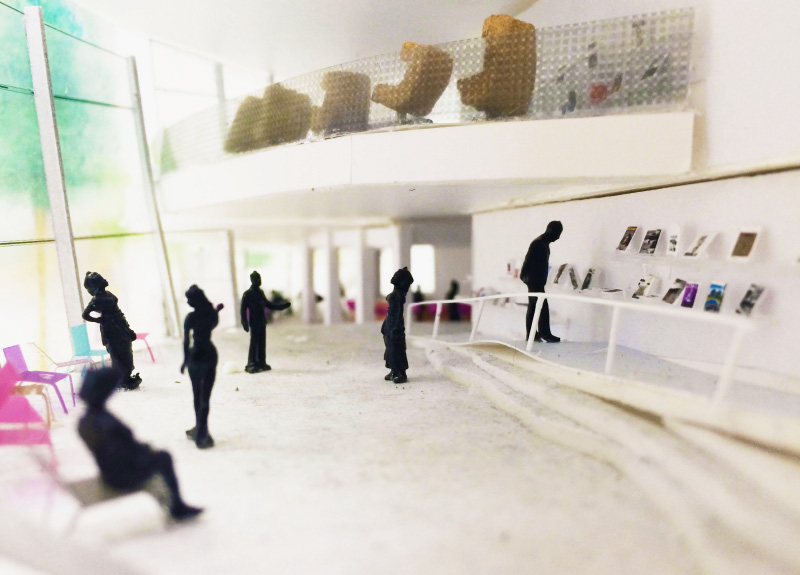 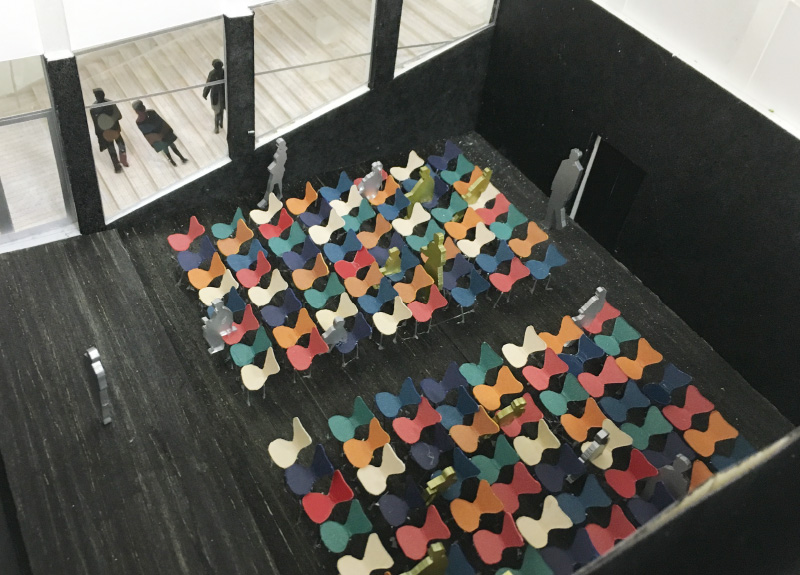 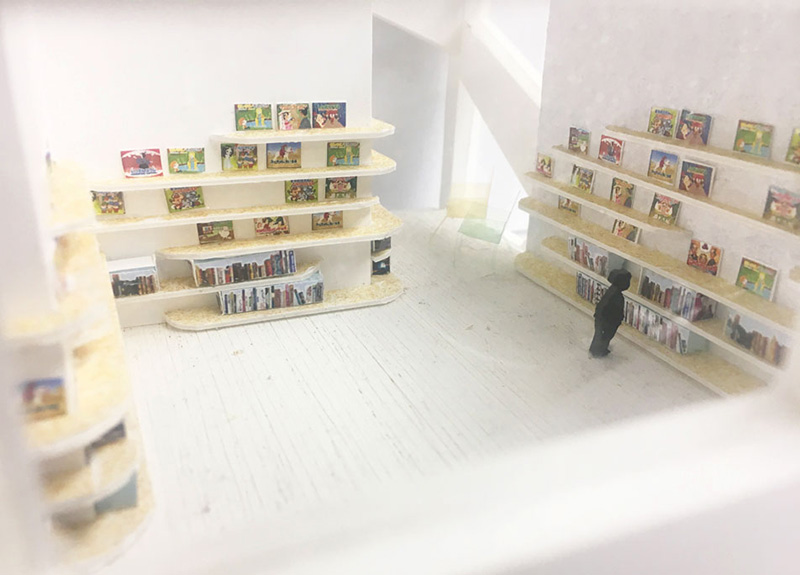 Spaces open to the environment

There are some terraces outside for reading books. These roof terraces are green with plants, so you can have a relaxed time under light that comes through the trees or in a field of grass. If you get to a higher floor, you can see the town and Kanayama. The overall shape is like a propeller of an aircraft, creating a flowing atmosphere into the buildings. This not only creates an approachable atmosphere for people, it is also able to guide wind flow inside the building. Ota is famous for strong winds. By moderately inviting the strong wind, a comfortable airflow can be created inside the building, contributing to saving energy at the same time. 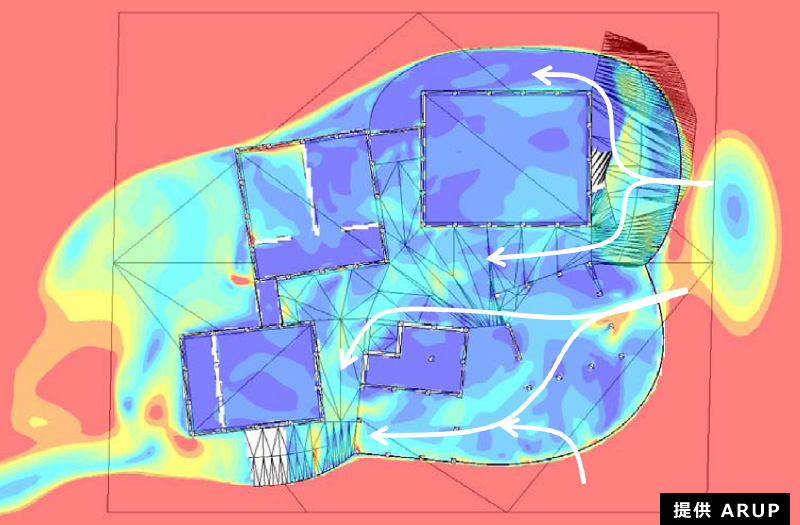 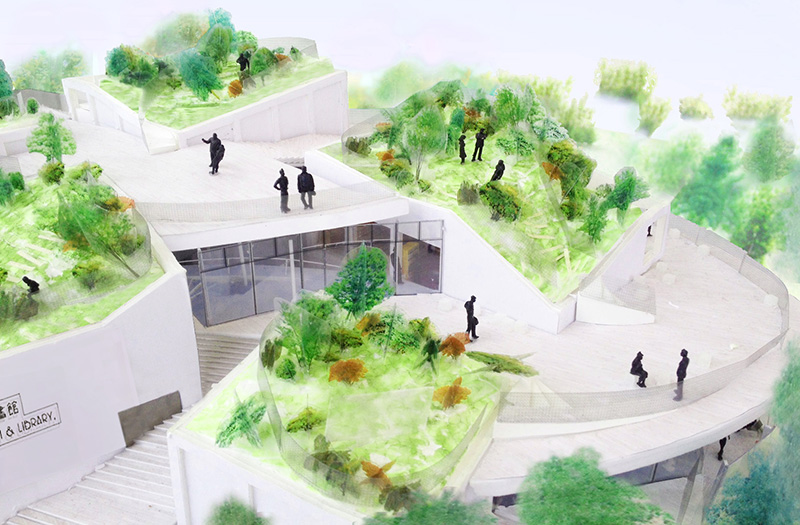 Creating the North Exit together

This is a structure for bringing vitality back to the area around Ota Station. Although the actual construction of the building is finished , this does not necessarily mean it is complete. It needs to be a live space that many people can walk through and enjoy.
The process of design reflects the aforesaid concept. We conducted workshops with the citizens of Ota, had discussions with experts, and made many important decisions. Through those discussions, we untangled matters such as the interactive zoning of the art museum and library and the number of “boxes” it should have. Also, we listened  to many ideas about making this architecture fit into Ota City. The draft design was finalized through this process. 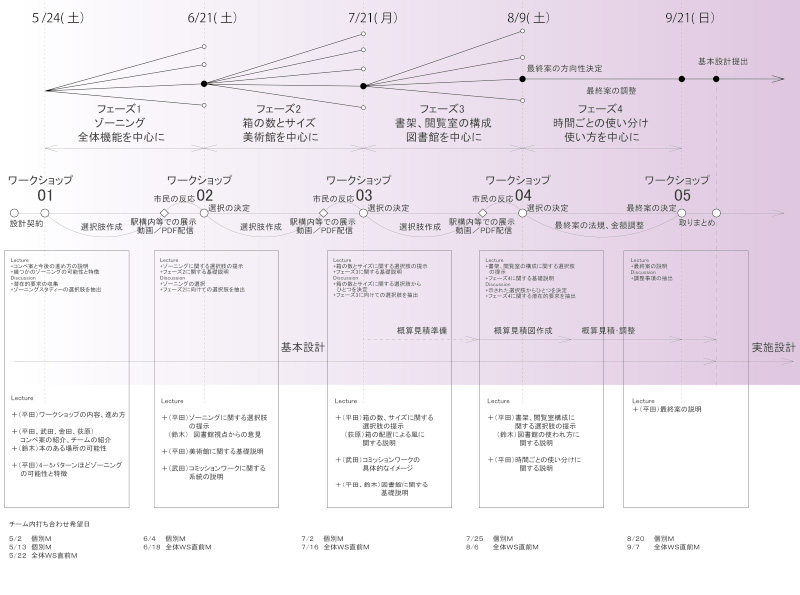 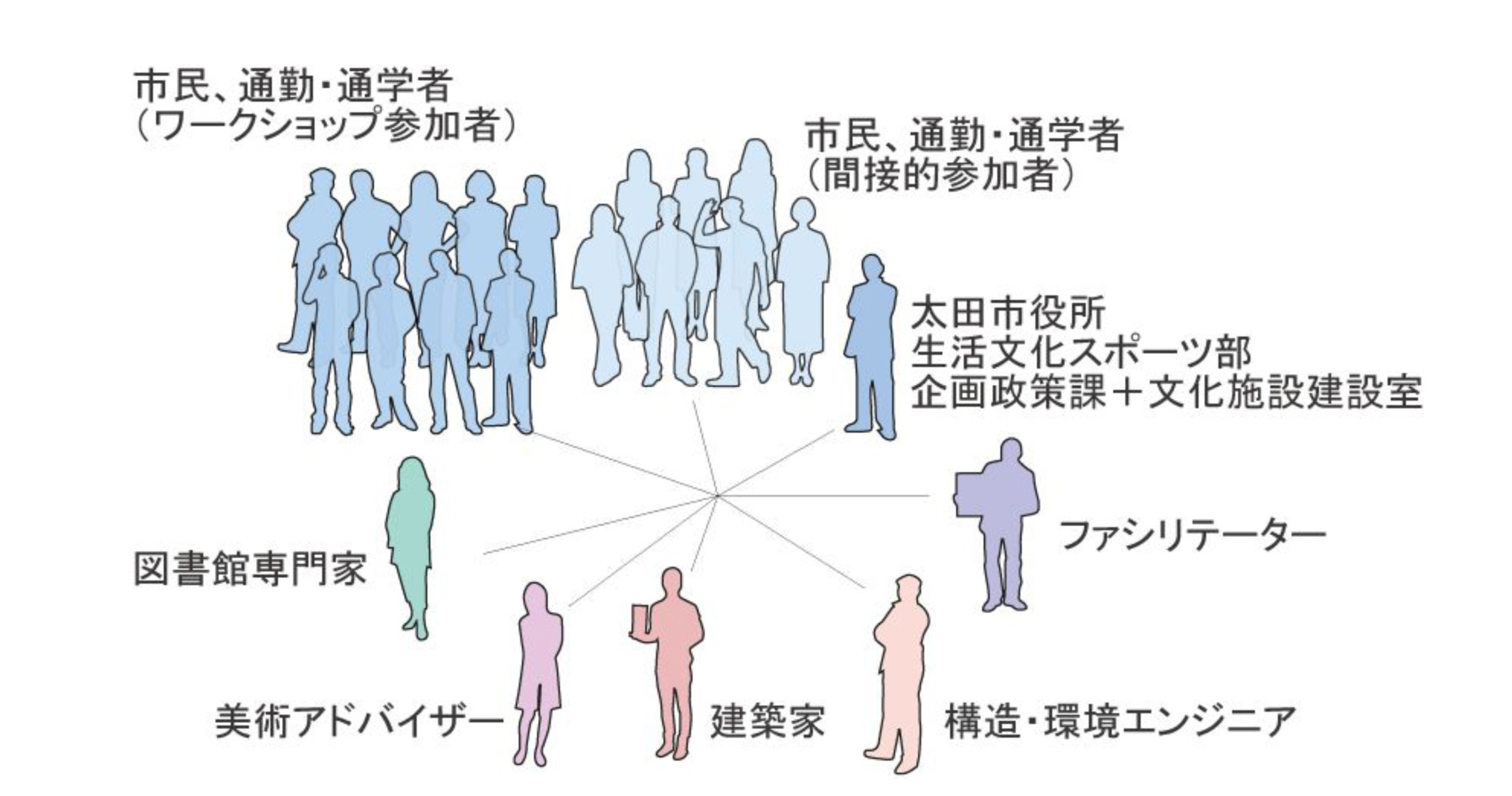 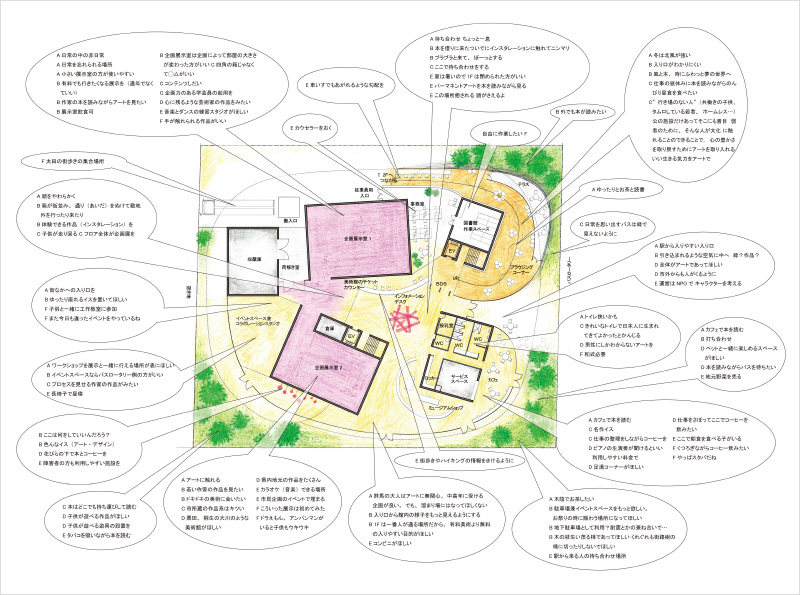 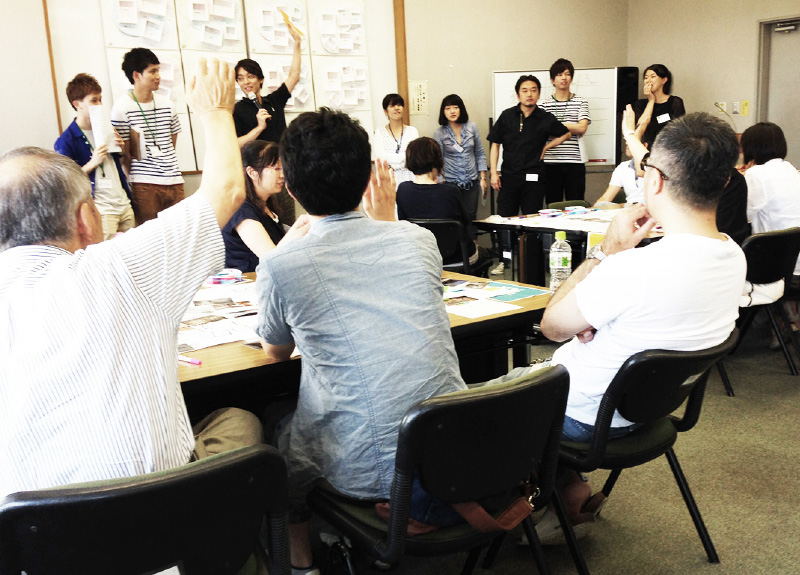 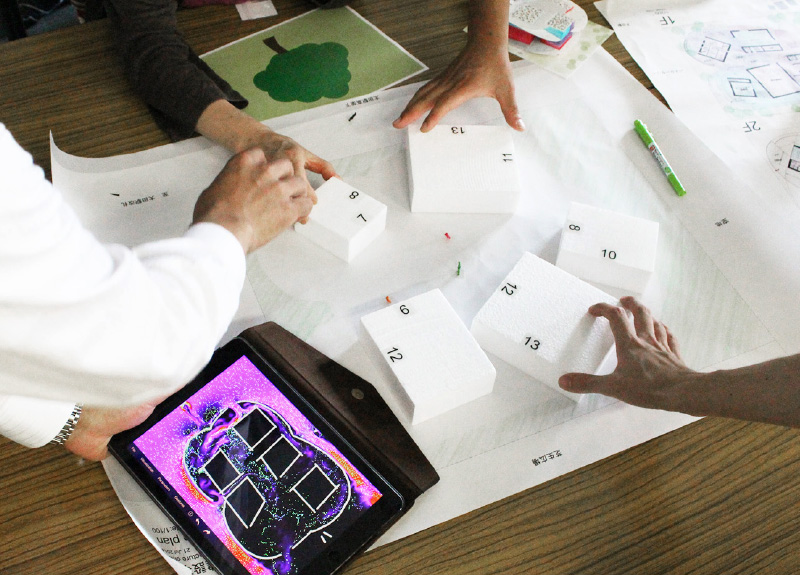 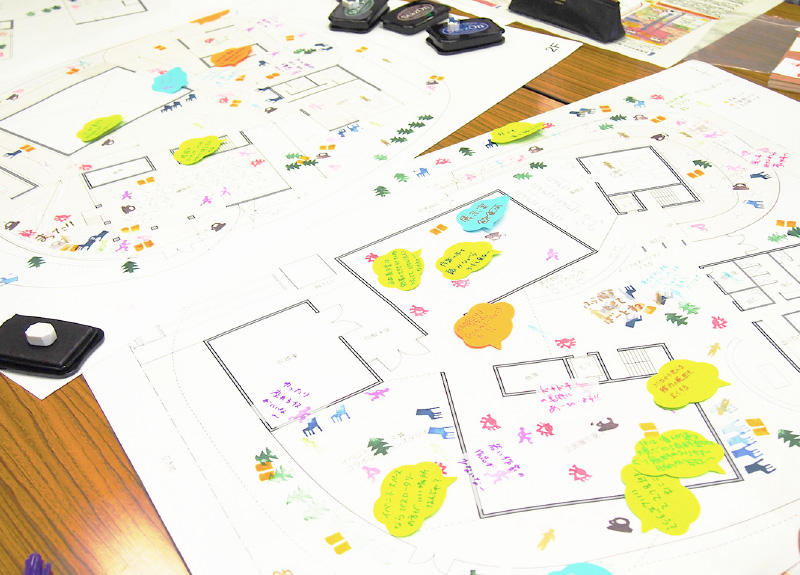 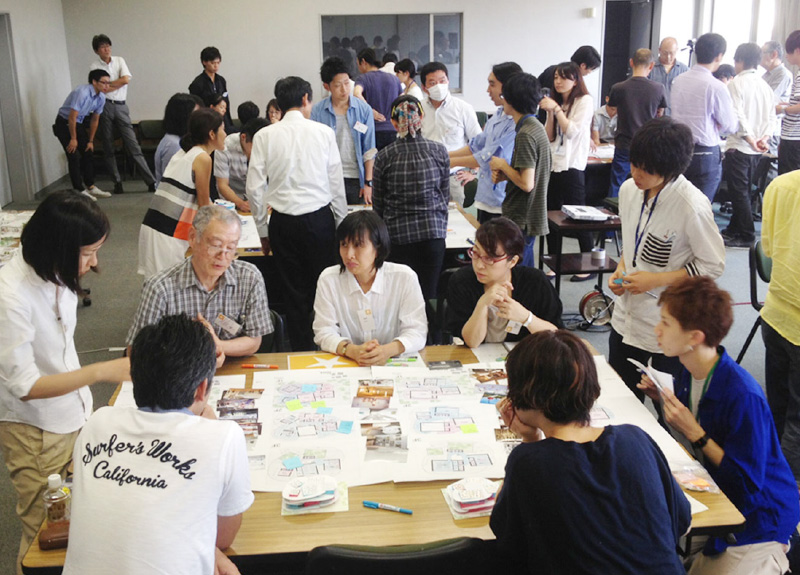 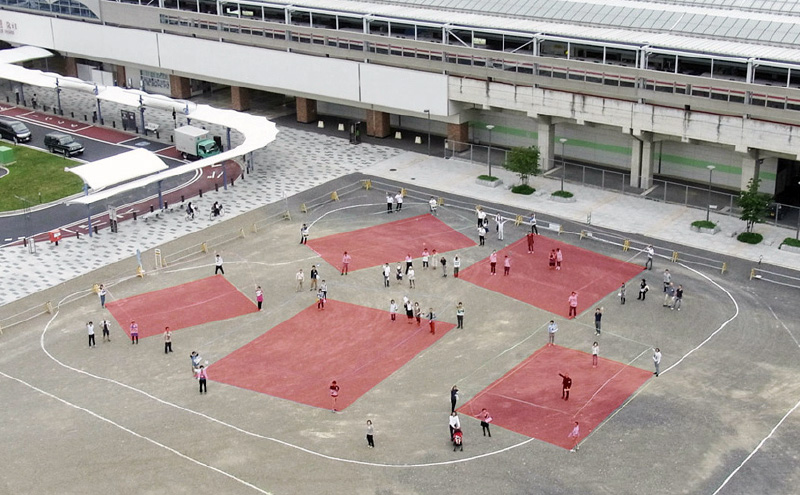 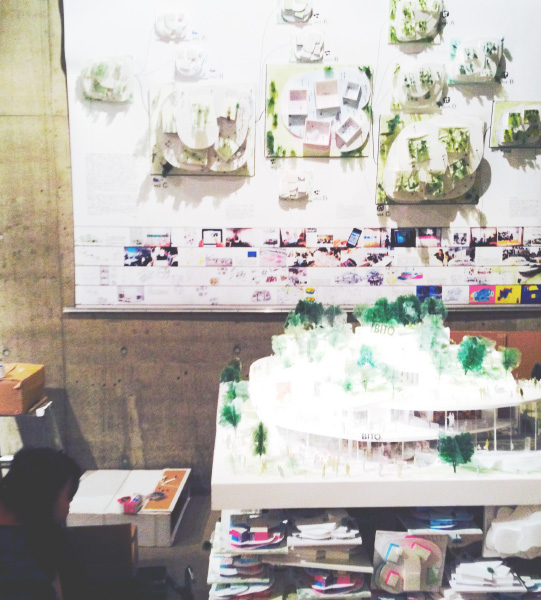 Construction is underway. When it is finished, we hope the structure, like the knots of the streets of town, will live, breathe and be loved and used by many citizens of Ota. 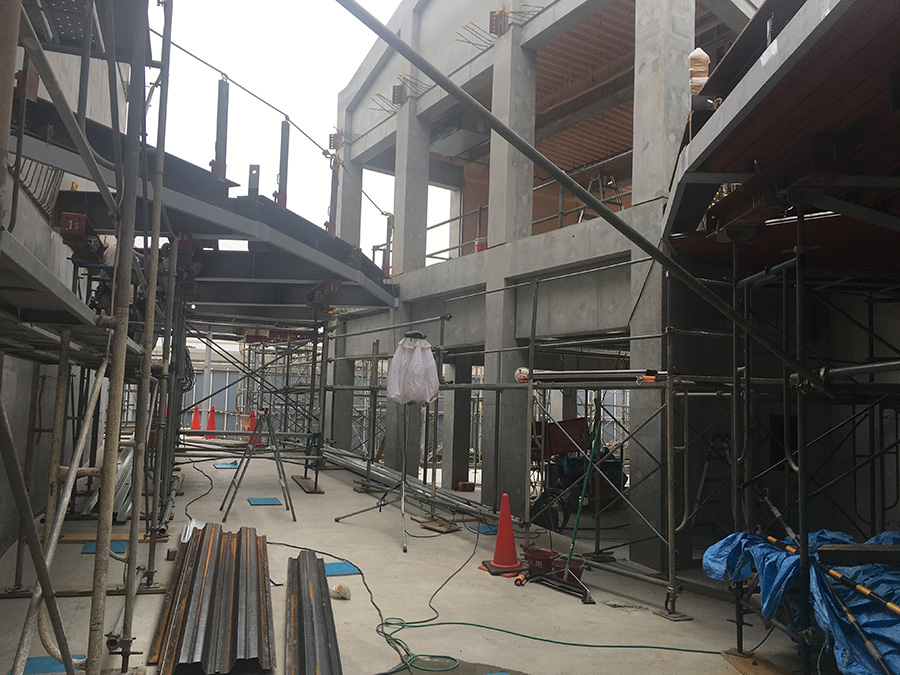 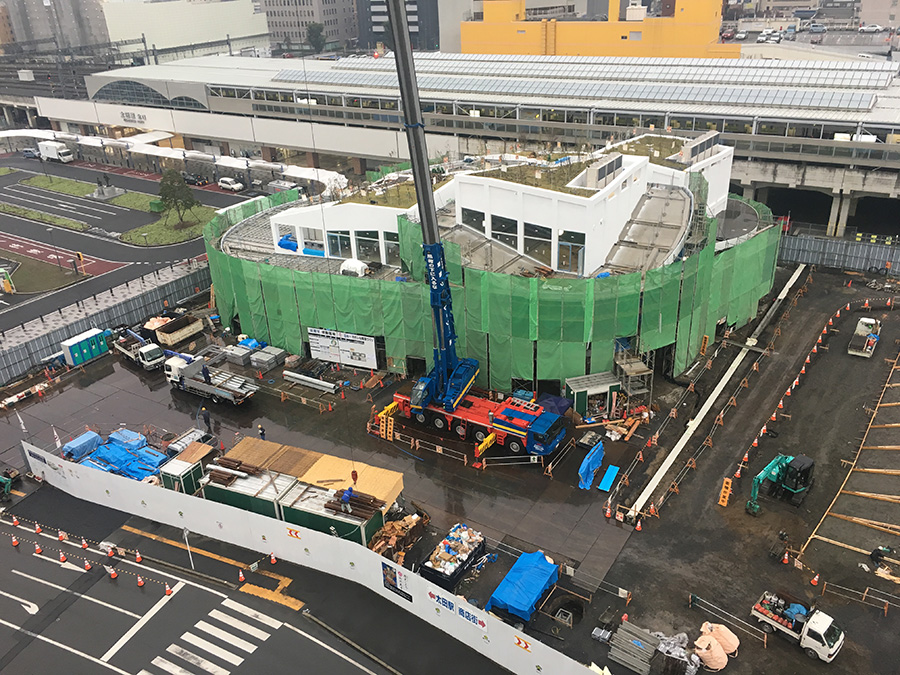 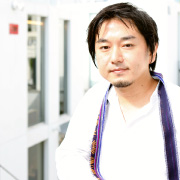 Born in Osaka, Japan in 1971. Graduated from the Department of Architecture in the Faculty of Engineering at Kyoto University in 1994. Received a master’s degree from the Kyoto University Graduate School of Engineering in 1997. After working at Toyo Ito & Associates, Architects, he established “akihisa hirata architecture office” in 2005. He was taken position as an associate professorship at Kyoto University from 2015. His important works include Masuya (2006), Alp (2010), Bloomberg Pavilion (2011), Coil (2011) and Kotoriku (2014). He was awarded the 19th Japan Institute of Architects Newcomer Prize (2008), Elita Design Award at Milan (2012), Golden Lion at the Venice Biennale (2012:with Toyo Ito, Naoya Hatakeyama, and two other architects), Colored Concrete Works Award at Berlin (2015) etc. His publications include Tangling (LIXIL, 2011), etc. He has lectured at Bauhaus Dessau (Germany), Harvard University (U.S.A), University of British Colombia (Canada), Queen’s land University (Australia) and at Architecture Foundation (U.K.), etc. He has done personal exhibitions in Tokyo, U.K. and Belgium, etc. He has also sent his works to a variety of Art fairs such as Art Basel, Frieze Art Fair and Milano salone.

To address the Ota City Art Museum & Library logo mark design and the signage project, I asked Mr. Akihisa Hirata, who designed this facility, about the concept for this building and the background of the design and summarized the following five keywords.

The design is based on these keywords.

Considering that there is no particular mark, the aim was to create a mark from a combination of original fonts. The 4-tiered Japanese and English letters were combined to mimic a hill-like shape that you can climb, which is the feature of this building. This also emphasizes the idea of a global, borderless space. The ruled line surrounding the logotype expresses the idea that this building itself has no front and back. By enclosing it with a line, letters become symbols and a kind of mark. This means that this building has no front and back sides all around, and it is open to all.
All typefaces used for the signage inside the building and brochures are basically original. 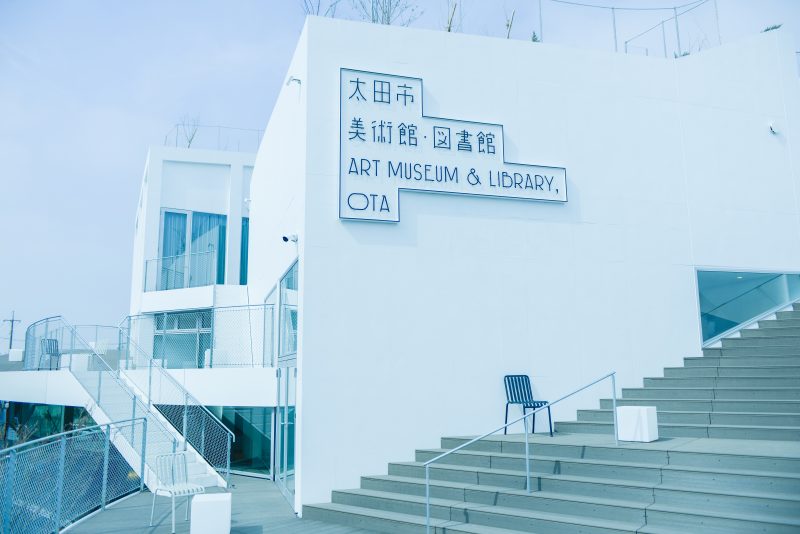 Another big concept was “to take in the city, and blend into the city”.

Therefore, by incorporating signs and billboards found around the city into the signage project and considering how it can be transformed into a mechanism for attracting people, and thus showcasing its openness, as this project aims to achieve, I have incorporated neon signs, fonts attached to walls and pillars, and other signage that exists in the city, giving it the role of a signboard.

In addition to its role as signage showing names and directions, I also aimed to create something that visitors can enjoy the same way they enjoy art and books. 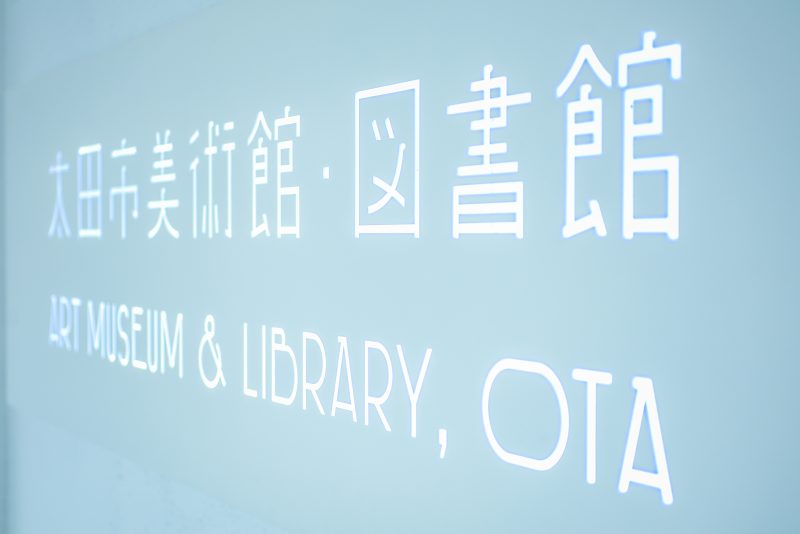 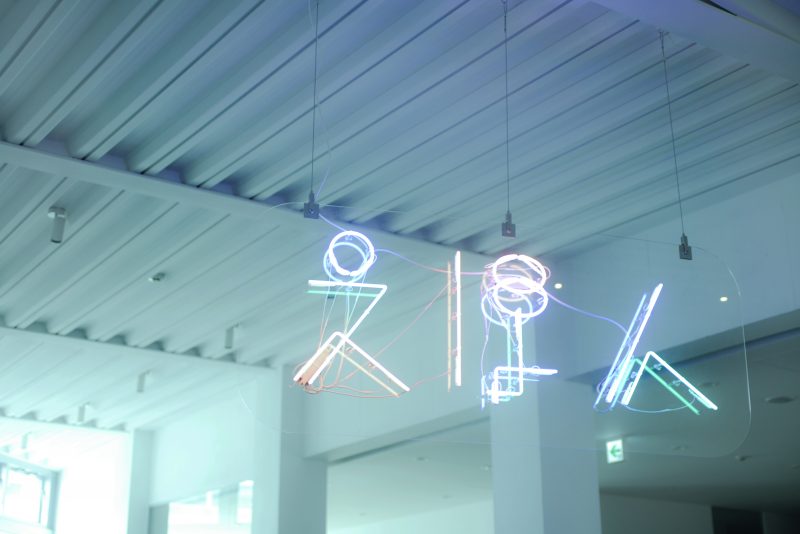 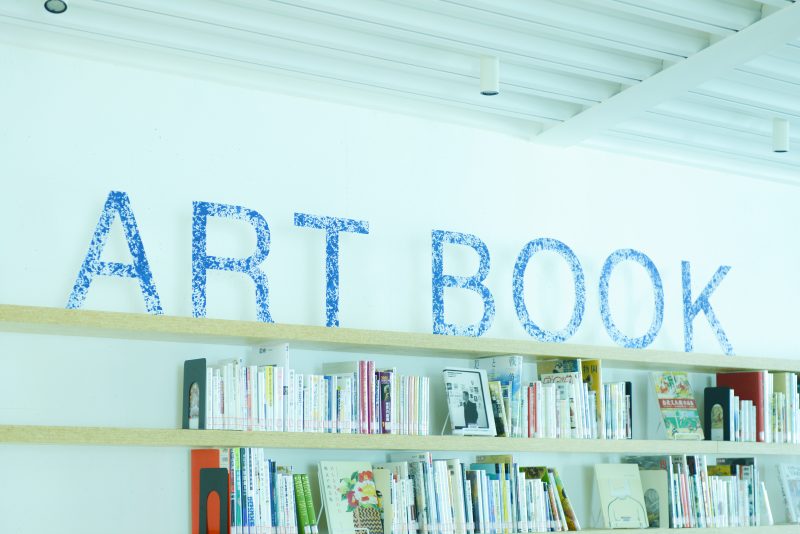 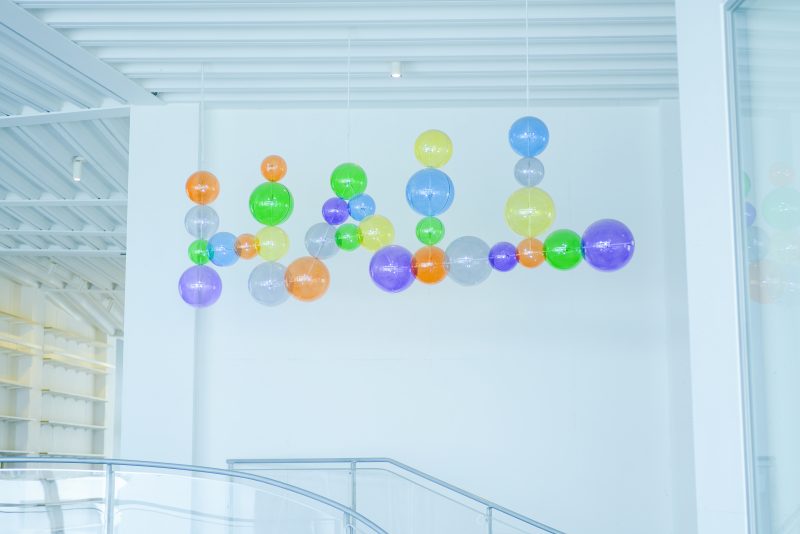 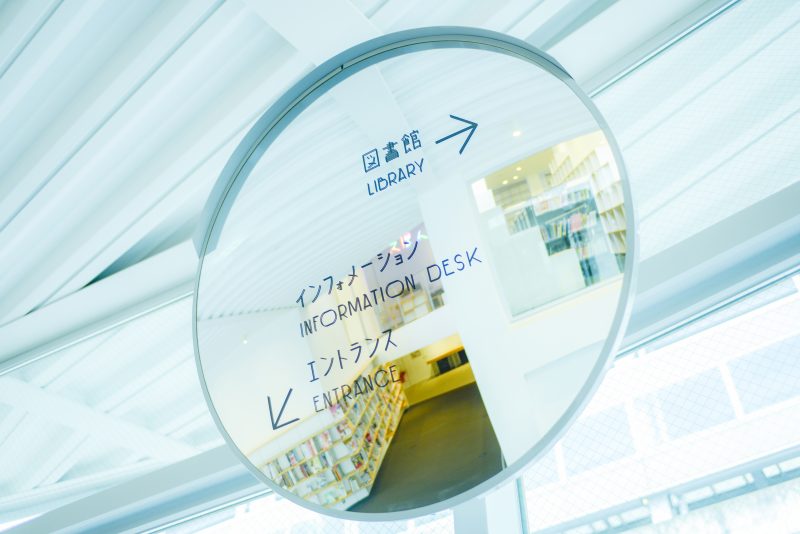